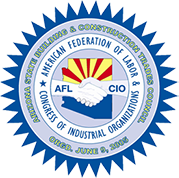 Through their many years of public service these candidates have continued to show a commitment to Arizona’s working families. AZBTC looks forward to continuing its work with these federal candidates on policies that create union jobs and support working families.